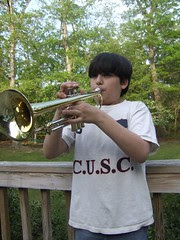 Trumpet
Originally uploaded by Teckelcar
It's that time of year when it seems everybody has a recital. On Sunday Rebecca, Max, and Nate had their spring piano recital. Yesterday, Tuesday, was Jake's last concert of the school year.

So in honor o all this musically, all four are artist of the week.

Max was first up on Sunday and he looked so dapper in his little suit. We actually got it for him to wear at his big brother's Bar Mitzvah next month, but Max really wanted to wear it to the recital. Which was fine by me, it will be nice to get more than just wearing out of the outfit before he grows out of it. It wasn't a perfect performance, but he improved while he was at the keyboard and he never lost confidence. I loved the rapport he has with his teacher.

Next to preform was Rebecca. She too was arrayed in her Bar Mitzvah finery. She did a great job and really enjoyed playing her pieces. She is a natural at piano once she gets over her little snits when learning a new piece. 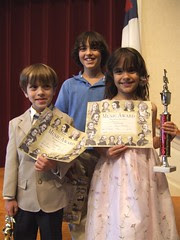 Piano recital May 2009
Originally uploaded by Teckelcar
The last one up (at least for our family) was Nate. As I have said before, he's an old pro at this recital thing. He plays with confidence and style. It's a pity that this will be his last piano performance. he has been wanting to quite piano for a while and we have decided to let him drop it next year with the understanding he'll pick up band in middle school the following year.

At the end of the concert trophies were handed out to the students that participating in the trophy judging (Nate skipped it) and everybody got a certificates for being in the recital.

Now we fast forward to Tuesday and Jake's concert. I was unable to attend it, it was a bit late for Max and Rebecca and it was easier for me to drop him off and have Larry bring him home. They both seemed happy enough when they got home. Jake is not at all fazed by the whole being up in front of an audience, which will stand him in good stead at his Bar Mitzvah.

Since
I didn't go to Jake's concert it wasn't recorded, but I do have Max, Rebecca and Nate's for your veiwing pleasure.