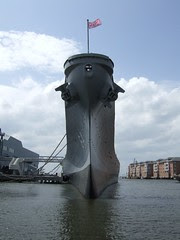 USS Wisconsin
Originally uploaded by Teckelcar
Today I got to chaperon Jake's band program during the big annual field trip.

Part of our time was spent at Nauticus, a great maritime-themed science center with it's crown jewel being the USS Wisconsin. I took a ton of pictures of the Wisconsin, both dockside and on deck. This particular one I think is the most visually striking. It is the bow of the ship and you can see the extreme narrowness of the prow above the waterline. Myself and all of my charges were amazed as we stood before her. I like also how you can just make out the "Don't Tread on Me" on the flag flying at her bow. A bow, it turns out, was originally slated to be part of the USS Kentucky before it was co-opted to repair the Wisconsin after its collision with the USS Eaton (it amazing what you can learn when you paty attention and read all the plaques). 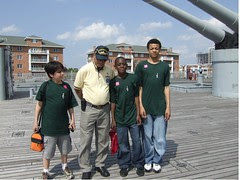 Four trumpeters
Originally uploaded by Teckelcar
The second picture I have here is one of four trumpet players on the deck of the Wisconsin. I was in charge of Jake and two other trumpet players in his band program. They are all nice boys and seemed to get along fairly well. While we were poking about on the deck of the Wisconsin, we met a very affable man that had served on the Wisconsin. It turned out he was part of the ships band and played the trumpet.

This moment of course required a photograph.

All four of them were being good sports about it and humored me, so I just took a quick picture and didn't fuss to much about it. I thought it was an amazing coincidence. Jake and I could have spent the rest of our visit chatting with him, but the other boys were getting restive and we had to move on.

I'll share more about our trip later.
Posted by Sarah at 11:36 PM