Rhodies in a Bowl 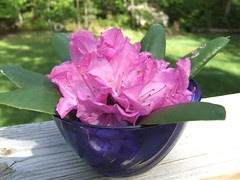 Rhodies in a bowl
Originally uploaded by Teckelcar
A few days ago I was doing a bit of baking for teacher and staff appreciation week. I decided to make an almond pound cake, mostly because I had all the ingredients and it's quick.

When I was done I had a simple cake, dusted with sugar on a white cake board.

Now I know the cake is delicious, but the visual was blah to say the least. I decided to punch things up a bit with flowers, but I decided maybe it wasn't such a good idea after all. Quite a few types of flowers are edible (pansies, roses and violets come to mind), but all I have right now are rhododendrons and they are not such a good thing to eat. So I nixed the idea.

Instead I decided to float them in a little plastic, cobalt blue bowl I picked up the other day.

The contrast of the flowers with the bowl was quite stunning and I just had to share.
Posted by Sarah at 8:36 PM