Artist of the Week: Tell-Tale Hand 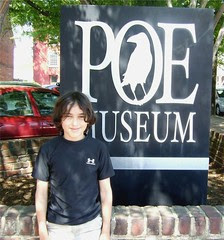 Nate at the museum
Originally uploaded by Teckelcar
This week's artist is Nate. He had a big school project called "Give a Virginian a Hand" due this past Monday. From a fairly large list of celebrated Virginians he had to pick one, write a brief biography, and create a poster incorporating a latex glove for the hand.

Nate quickly scanned the list, closed his eyes, and stabbed at the sheet. The result was Edgar Allen Poe. He was a bit dismayed, apparently Poe wasn't exciting enough for an athletic 10 year old boy. So with eyes shut tight again he gave it another stab and got... Poe again.

I, on the other hand, was delighted. Strictly speaking Poe wasn't a Virginian, but he did spend the bulk of his childhood in Richmond and spend a fair amount of time in the Old Dominion as an adult. Richmond even has a nifty little Poe Museum housed in the oldest standing building in the city. It has a variety of Poe artifacts, pictures, manuscripts, and, best of all, a monthly Unhappy Hour. 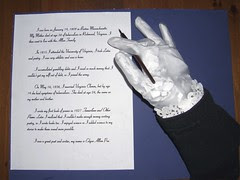 Poe poster
Originally uploaded by Teckelcar
j
We found out all sorts of interesting facts about Poe. He was the first to add science to his fantastic tales, he was an athlete in school (he was a medalist in boxing!), and was in general a fascinating character.

For the poster Nate decided to fill the glove with a crumpled and torn copy of the Raven. I supplied a pant leg from an old pair of black toddler pants for the sleeve and a few lace doilies for the shirt cuff. Nate wanted a pen for the hand and I was able to dig up one of my old calligraphy pens. Nate taped the glove onto an empty tin can, attached the doilies, and gloved on the sleeve. The end result was quite impressive.

For the biography Nate selected a script type font, Bow to be precise, and positioned the hand so it looked as though the hand had just finished writing. My only suggestion was to wrap the end of the sleeve around the lower corner of the poster to create a finished edge. He thought that was a good idea and stapled the fabric in place.

I really like the end result and it will be interesting to see what the class thinks of it.
Posted by Sarah at 3:14 PM