Artist of the Week: Mountain 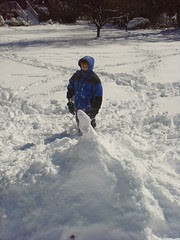 Mount Max
Originally uploaded by Teckelcar
Mr. Max is this week's artist and his medium this week is snow.

As y'all well know by now we got some snow last weekend. Quite a bit for this area in fact. On Sunday, after it was all finished with snowing and blowing, we got a gloriously bright sunny day. Meryl helped Larry and I dig out the driveway and in the process we made a bit of a mound near the end of the driveway. Max was outside with us and promptly laid claim to it and dubbed it "Max Mountain."

He spent the rest of his time outside augmenting his mountain and adding features like caves. When we asked him the names of his caves he announced they were the Max caves. He did not like my suggestion of the Min caves of Max Mountain. Any way you can see one of his caves near the base of his mountain.

The column on top was originally smaller, but after I mentioned that it looked kind of like God's Thumb from the movie "Holes" (we had just watched that with Meryl) he decided to make it a bit bigger. The end result was even more like the movie version, which is ironic considering he claimed that he did not like the movie. Either way he had a good time mucking about in the snow and dang it, the boy is just too cute when he is all bundled up.

Meryl agrees with me and in fact I have to give her credit for this picture along with the one of Nate a few days ago. I was a bit of a slacker in the picture department this past weekend, but then again I knew somebody was going to take at least a few.
Posted by Sarah at 11:59 PM