Artist of the Week: Village 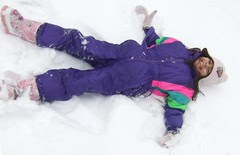 She is not quite the builder her brothers are, instead she likes to just mess about in the snow. With our last snowfall she made a small pile and then spent the rest of her time outdoors charging about and making snow angels. She has fun, just in her own way, Which is just what I would expect from my very independent daughter.

When she does decide to do something she fully commits to the project. Which brings us to this week's project. 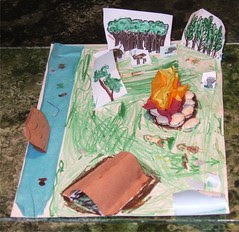 Powhatan Indian village
Originally uploaded by Teckelcar
At one point this year second grade was studying the various tribes of native Americans across the North American continent. One of the tribes, the Powhatan ( a local tribe still in existence in Virginia), had a project devoted to them demonstrating the life of an Eastern Woodland tribe. The students had to depict 10 examples of the various aspects of life in and around a village.

The rubric pasted on the underside of her project lists examples to be used and they are:

Rebecca loved this project and decided to make it 3 dimensional. The canoe and the fire are a bit off scale, but the rest all nicely mesh together. She made little fish in the river, animals are by the edge of the woods, and people are scattered about. It's a fun project and she included well more than twice the required 10 examples. From her teacher she got a well deserved E (excellent) for her effort. I think it's absolutely terrific.
Posted by Sarah at 11:31 PM