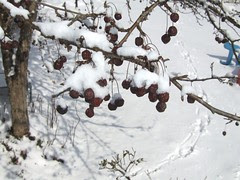 snow berries
Originally uploaded by Teckelcar
This picture was from last Wednesday, the 10th, after we got our last snowfall. It was only a few inches, but it was enough to throw the area into a tizzy. The snow squall hit just as the buses were going round picking up high school and middle school students.

It was awful out so I drove Jake to the bus stop and allowed him to wait in the car. Visibility dropped to 50 feet and there was no way I was going to let him stand by the side of the road in such conditions. We waited for a good half hour when a teacher who lived in our subdivision stopped by and informed us that the school system just declared a two hour delay. We thanked her and struggled home with the car fishtailing twice during our less than two block drive.

Ultimately school was canceled, much to my relief and the delight of the kids. Unfortunately quite a few kids were stranded at school until the weather cleared that afternoon.

Since then the weather has remained fairly cold and the snow has hung around far longer than the norm for here in Central Virginia. But I think it'll be mostly gone, excepting the larger piles of shoveled snow, by the end of this weekend. Temperatures will be up in the mid fifties and that should melt it away.

Oh and the tracks, those are from the deer. They lead from the woods right up to the tree next to the house. We see them almost anytime of day around here and they are very bold. So bold that I've even found deer tracks under the deck. However the tracks do add to the composition of the picture.
Posted by Sarah at 11:52 PM