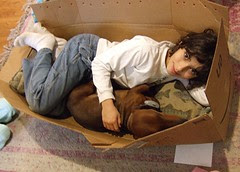 Nate and Dell
Originally uploaded by Teckelcar
Much to our children's delight we have a accumulated a fair number of large boxes.

Max still has his drum box and now Nate has a large box of his very own.

When he first got his box Nate liked to put the dogs inside it. They would at best sit inside for a few seconds and then, with a mighty bound, escape their prison. However Dell was more than happy to curl up with Nate inside the box privided there was a comfy cushion and Nate. I thought the two of them were very cute and snagged this shot.

Of course it's now a very tattered and limp piece of cardboard. Nate is very hard on this things and the box was no exception. He was quite irate the other day and discovered the therapeutic value of chucking stuff. To whit: small metal airplanes are great fun to whip at cardboard, particularly if they are thrown like a ninja's throwing star. He happily spent a few hours systematically demolishing his box.

I glad I took my picture when I did, because now the box is no more.
Posted by Sarah at 11:57 PM