Artist of the Week: Snow Dome 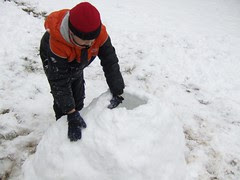 Building the snow dome
Originally uploaded by Teckelcar
Or another way to look at it, an igloo.

Even through the hits keep coming with our never ending winter storm watch, the artist of the week carries on. This week Jake is the one in the spotlight with his snow dome.

It first started out as a smallish fort like structure. He showed it off to me when I came out to see what everybody was building. After the requisite picture taking Jake asked me if it was a good idea to try to put a top on it. I gave him a breezy go ahead along the lines or "Sure! Why not!" I didn't think it would be particularly easy, but I figured why not give him some encouragement and see what happens. 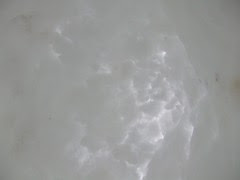 Inside snowdome, looking up
Originally uploaded by Teckelcar
That was all he needed.

He was outside long after his siblings bailed on their projects and came in for hot cocoa. It had even turned to light rain and he kept on building. In the end he was able to cap it off. I came out at just the right moment and stuck my camera inside with the lens pointing up.

So far his dome has weathered two more storms and has nicely iced over. It is not quite as big as the one over in Herndon, but then again he is just one boy. He didn't have three tons of snow at his disposal, just what he could scrounge in our backyard while designing it on he fly.

I think it came out looking rather nifty.
Posted by Sarah at 11:42 PM