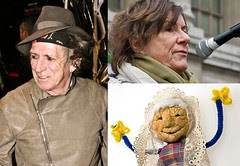 Apple doll
Originally uploaded by Teckelcar
Meryl and I talk about some of the oddest things when we are on the phone. It might start off reasonably enough, usually about a recent blog post or something in the news, but then we get sidetracked and end up in freaky town.

Case in point: her recent post about Jenny Tonge. Somehow we ended up discussing who she most resembled and settled on Keith Richards. Upon further reflection I decided that they both look like apple dolls (For the uninitiated, it is a doll with a head made out of an apple that has been carved with human features and allowed to dry.)

You have to admit there is some similarity among the three.

This, however, is not the end of the end weirdness. Oh no, we go much further.

To find an image of Keith I googled Keith Richards Apple doll. I figured I was not the only person to think this and I was right. I found a great article that has Keith chastising Amy Winehouse. Which alone is an amazing concept. Never mind the coconut tree incident- Keith Richards thinks Amy Winehouse is a train wreck..

So without our weird phone calls I never would have googled the phrase "Keith Richards apple doll" and my life would be that much poorer.
Posted by Sarah at 11:59 PM