This is possibly one of the coolest pictures I have ever taken and it wasn't even my idea. 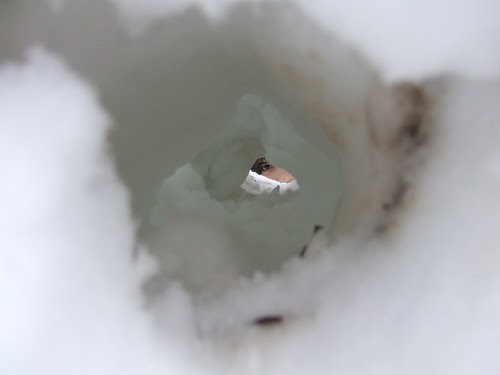 I see you, originally uploaded by Teckelcar.
Nate had built a huge tower in our backyard from the snow we have gotten this weekend. It was literally taller than him. It was also riddled with tunnels and holes, Nate had me photograph them.

For this shot he told me to kneel down and shoot through the tunnel. He pressed his face near the tunnels far entrance with the idea that this would demonstrate the the tunnel goes straight through the tower to the other side. I could barely see his face, it was just a faint smudge through the viewfinder. I snapped two pictures, having him move just a smidge to ensure I got something.

Amazingly it was the first picture that came out best. I decided to post a larger version here so you can see the picture in all its glory. I love how you can very clearly see his brown eye peering at you from the other side.

Not bad for shooting almost blind.
Posted by Sarah at 10:53 PM