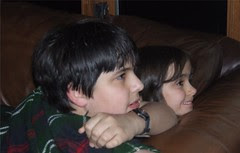 Jake and Rebecca
Originally uploaded by Teckelcar
The kids are really enjoying the Roku, Rebecca in particular. She has found a cartoon, Redwall, that is new to her and is working her way through all the episodes.

While Rebecca and I were watching Nate announced that his Latin teacher had declared the show as terrible and as a result he wasn't going to watch. Jake as opposed to Nate, was willing to give it a try and was charmed by the series. The two of them, oldest and youngest, started watching them together this weekend.

I caught the two of them curled up side by side on the couch sharing a blanket while watching the show. It was just too cute and I had to take a picture. The first shot was just plain awful, but the second one is a real keeper.

It's wonderful to see my children to be so happy together. For the most part they all do get along, but I feel like the day is filled with endless bickering. Moments like this tell me that deep down they do love each other.
Posted by Sarah at 11:36 PM