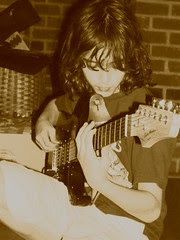 Nate
Originally uploaded by Teckelcar
The theme this week was express yourself and I though what better way to show this than Nate doing just that.

Nate took years and years of piano and as a result became quite proficient and at times had a bit for fum. But the piano was never really THE instrument for Nate. What he really wanted (and begged for) was a guitar.

We started him off with a little acoustic guitar that he quickly outgrew. By the time we finely rounded up a teacher Nate had graduated to Larry's full sized guitar. It was a bit big, but that didn't slow down Nate in the least. Soon he was asking for an electric guitar which we got him with the understanding that he would learn to play both acoustic and electric.

And play he does. Nate has found his instrument and a way to express himself musically.
Posted by Sarah at 11:50 PM