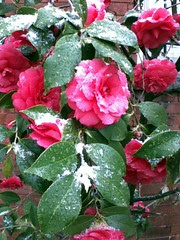 snow roses
Originally uploaded by Teckelcar
This morning we awoke to snow on the deck.

It wasn't very much, a dusting really. However it was enough for the dogs to leave paw prints as they headed out to yard. The sky was gray and sleet rattled against the skylights. I wasn't too keen on taking the kids to Richmond for Hebrew school. I checked the adverse weather hotline (no new message) and watched the news to see if we had a cancellation. No such luck, but I did take comfort from the reports that the roads were not icy. The ground had warmed enough that a single nights dip into the 20s was not enough to cause problems with the wintery mix.

We loaded into the van and headed off to school.

The sleet transitioned into snow and there was less traffic than usual. As promised by the newscasters the roads were fine, just wet from all the precipitation. 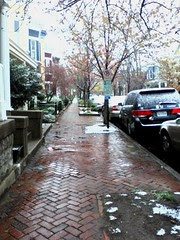 spring snow in Richmond
Originally uploaded by Teckelcar
After I dropped off the kids to their respective classrooms. I decided to take a little walk in the surrounding neighborhood. I love taking pictures of flowers in the snow and the next street over was in a very quaint residential area called The Fan.

The Fan did not disappoint.

I found loads of flower pots and bushes graced with snow. Again I was stuck using my cell phone's camera, but this was the type of photography I can make work with it. I spent a very happy half hour strolling along a two blog stretch snapping pictures of whatever struck my fancy.

I then headed back home for a bit. Jake's class where he is an assistant, had been canceled. He needed to go back home to work on the boatload of homework he has due in the next couple of days. Interestingly when I went back to the same street a couple of hours later all the snow was gone. I'm glad I had taken the time earlier to catch the ethereal beauty of snow in March.
Posted by Sarah at 11:47 PM