Artist of the Week: Got Game 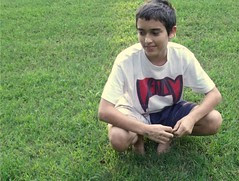 Nate, a photo by Teckelcar on Flickr.
Nate is this week's artist because he's got game.

Nate is a natural athlete and as a result he does well in most sports. Right now he is currently involved with a travel lacrosse team. Since it is not lacrosse season the team does not have any regular games. However they do go to various tournaments in the area.

A week and a half ago there was a tourney up in Richmond. Nate's team was scheduled to play on Sunday, the idea being that it would be just a one day event for each age group. Then we got a call. It turned out the age group that Nate used to be in would not have a goalie, could Nate fill in? Their games would be Saturday, so the two teams had no scheduling conflicts. We asked Nate and he was game.

Poor guy was wiped out Saturday, he was in the whole time and played very hard. He also played well as a borrowed goalie and his team won their age group! Sunday, however, was a different story. Nate did his best, but the sheer amount of playing time from both days wore him down. Even though his team did not win their age group, he did a good job. By the time Nate got home he was utterly exhausted. It took him two days to recover. That'll be the last time he plays for two teams in one tournament.