Sunset on a Busy Weekend 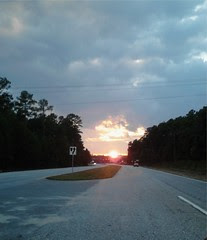 sunset, a photo by Teckelcar on Flickr.
Between band, soccer, and lacrosse I logged a lot of miles this weekend.

It all started with a game Friday night. Rebecca's team was invited to be ball girls for the VCU women's match up. The girls were stationed along the edge of the field, each one in charge of a soccer ball. If a ball went out of bounds the nearest ball girl would hand her ball to the player and then chase down the errant ball. It got very cold, but the girls remained cheerful and had a grand time noshing on popcorn during halftime.

Then on Saturday it was soccer games for the dynamic duo, lacrosse tourney for Nate, and a band competition for Jacob. I did soccer duty while Larry dropped off Jacob and took Nate. It was a long day with Jacob's bus arriving an hour later than originally scheduled.

Today I was very thankful that it was not our turn for the Sunday school carpool, I happily  pushed Max and Rebecca out the  door at 8:30 and enjoyed a few hours of piece and quiet. Larry meanwhile took Nate to day two of lacrosse before heading out for a game of his own. It was up to me to collect Nate, which I did after Rebecca's rare Sunday afternoon game.

Everybody had a good time, but I think they will be glad this busy weekend is over when they head back to school.
Posted by Sarah at 11:53 PM