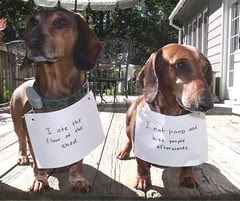 The idea is that your dog has committed some sin, you make a sign describing what happened, and take a picture of the dog with said sign. The result is quite often hilarious.

I found out about it from a dachshund owning friend. There is a rather dubious pride in the dachshund community in preponderance of dachshunds on the site, partially due to the site's owner having dachshunds. But the real reason is because dachshunds are awful dogs that get into all sorts of mischief (and yet we love them).

I whipped up this picture of the red boys and submitted it to the site. So far it hasn't appeared, but the website is transitioning to another platform and it may have gotten lost in the shuffle. I'll try again after the dust settles.

And yes, John really did eat the floor of the shed. He was trying to get to the critter underneath.
Posted by Sarah at 11:58 PM