What to Do with Key Limes 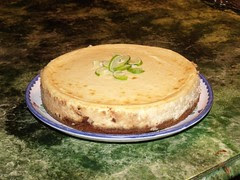 The cheesecake came about for two reasons, my in-laws were visiting for the weekend and I had picked up a bag of key limes. It was a toss up between cheesecake or pie and the cheesecake won out. I ended up calling Larry at work and had him pick. It was just as good as I remembered and was a huge hit with all those over the age of thirty in the house.
Posted by Sarah at 11:18 PM