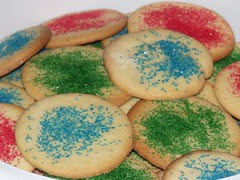 Cookies, a photo by Teckelcar on Flickr.
Today is Max and Rebecca's 11th birthday. To celebrate I baked a batch of sugar cookies for Max's class and a batch and a half of cupcakes for Rebecca's class to be eaten at lunchtime. Right now their respective classrooms are thirty plus students apiece, hence the batch and a half cupcakes. It worked out that I gave treats to at least half of the entire fifth grade today. I could have handed out even more (it was so hard passing by a few of my favorites), but I had to draw the line somewhere.

The large class sizes are, fortunately, coming to an end soon. The school was able to convince the school to allow them to hire an additional fifth grade teacher. Luckily my two don't have to move, but I wouldn't protest too much if they did. The end result will be a smaller class sizes all around. 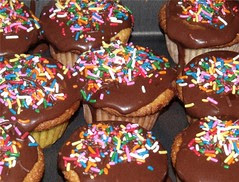 Cupcakes, a photo by Teckelcar on Flickr.
As for the treats, well there was much fist pumping when I arrived in the cafeteria  laden with all my baked goods. I gave out the cookies to Max's class first and amazingly only one got dropped. I had a several extras, four to be exact, so nobody was left out. Then it was time for the rather gooey cupcakes for Rebecca's table. One child declined, I think chocolate was not her thing, so she got a cookie instead.

The whole thing was a rousing success and I had enough cupcakes leftover to bring home for us to enjoy after dinner. The official birthday parties will be held in the next couple of weeks.
Posted by Sarah at 11:47 PM