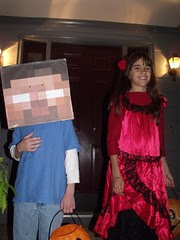 Herobrine and the Senorita, a photo by Teckelcar on Flickr.
I hope y'all had a happy Halloween, I know we did. Earlier in the week it was a bit dicey whether or not it would happen, what with Sandy and all. But we got lucky, it was just a glancing blow so our neighborhood has power and it was a fine, if a bit chilly, night for trick or treating.

Rebecca chose an easy costume to identify, a lovely little señorita. It was a challenge to find her something that wasn't... trashy. I really dislike the prevalence of "ho-wear" that is currently the fashion for all girls. Since Rebecca is not into the princess scene it was hard finding something she liked. Even Rebecca was disconcerted by the outfits available.

Max's is a bit more obscure. He is the non-existent character Herobrine from Minecraft (if you want to give the links a miss- Minecraft is a computer game where you can build almost anything with blocks and Herobrine is a person). I was able to download a pdf of the box head wrap created by Thisguyisme (warning on the camera work, it is not an easy video to watch, but the pdf files are outstanding) on youtube and tweak it just a bit to fit the box we had. Herobrine is just a Steve with white eyes, so I had to strip out the blue eyes in the files, but the rest was perfect. 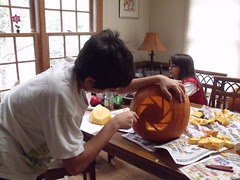 Nate carving, a photo by Teckelcar on Flickr.
As for the pumpkins this year, I only got six. I made sure to get them early so as to avoid last year's lack of pumpkin debacle. I didn't get more as Halloween approached because of that pesky Sandy. Halloween wasn't a sure thing and I didn't want to waste money on a boatload of pumpkins if it wasn't happening. Though the 2 for $5 pumpkins at Walmart on Saturday were certainly tempting.

Today was carving day and each kid got to pick out and design a pumpkin. Rebecca wanted a fiery unicorn, Jacob the Starfox logo, Max wanted a Creeper (a weird exploding creature from Minecraft), and Nate wanted to make the Aperture logo from Portal. As you can see Nate even carved his pumpkin and I must say he did a bang up job. As for the remaining two pumpkins I did a fairly traditional one and Cthulhu. All in all a rather nerdy set of pumpkins.
Posted by Sarah at 11:47 PM