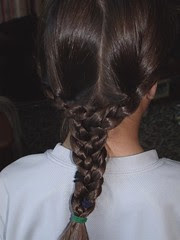 plaited, a photo by Teckelcar on Flickr.
Rebecca had soccer practice today and the big question before I take her is pony tail or braid. After years of battling she has realized that long, loosely  flowing hair and soccer do not mix. So now she tolerates the brushing out and gathering up of her tresses.

Which brings us back to the question: braid or pony tail?

Today she wanted three braids in a braid or, as I called it, a mega-braid.

This was a first for her and once I started it dawned on her that this would be an even longer process than normal. She fidgeted for a bit, but soon settled as each braid was made.The end result I thought was quite pretty and I took a few pictures so she could see my handy work. I think she agrees since she didn't immediately pull it all out once we were back home.