The sleepover yesterday did not go quite as planned. Jack, whose allergies had been bothering all week, came down with bronchitis and did not come. Kyle’s family decided that they would be leaving at an absurd hour Thursday morning to go camping, so he wouldn’t be sleeping over.

In the end, a good time was had by all.

After Kyle arrived Larry picked up some pizza. While we waited for dinner to arrive Jake and Kyle played one of Jake’s new computer games (Larry had ordered School Tycoon and Lego Star Wars the Video Game). The Lego game was a big hit. Even I am tempted to play it. Nate, Max and Rebecca were clustered around the computer while Jake and Kyle played. We had to pry all five of them away when the pizza arrived. After a very pleasant dinner Larry whisked the birthday boy, Kyle and Nate away to go bowling.

Rebecca was devastated that she was going with them. She spent the bulk of the time they were gone rolling about on the sofa crying out that she wanted to go bowling. I kept telling this was not how you get your way. There was no reasoning with her. Max on the other hand was happily watching TV and getting nebulized. I let them stay up for the return of the bowling party so they could have some birthday cake.

The birthday cake turned out very well. Here is Jake just before he blew out the candle. 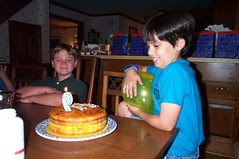 Kyle ended up having two pieces. He was very polite and complemented me on the cake after his first slice and said he knew it was a lemon cake. His eyes popped when I told him it was actually an orange cake. He gave me a big smile and said that is even better and demolished his second piece. I like Kyle.
Max, meanwhile was agitating about the goody bags lined up on the counter. Once we ere done with the cake we handed out the bags. Inside were several small things: a whistle, stickers, two balls and this.

The packaging is totally lame, but they rock. I got them at Walmart and I didn’t realize they light up until we were opening them up. At one point all four boys were having a terrific battle in the living room. Rebecca stayed in the background as just an observer. Bedtime was much more fun for Max and Rebecca; they got to take their sabers to bed with them. The sabers were even better in their darkened bed room.
The boys got to stay up and see the Phantom Menace. During all the boring bits they would leap up and resume their dual. 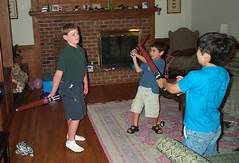 dual
Originally uploaded by Teckelcar.
At about 10:15 Kyle started to droop and wanted to call home. It was fun overhearing his conversation with his mother. He told her that this was the best day of his life. When he was done I drove him home.

Jake was a bit disappointed that he didn’t have a sleepover, but he did have a very good time.
Posted by Sarah at 2:33 PM