Artist of the Week: Creatures 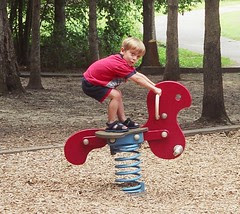 actionMax
Originally uploaded by Teckelcar. The artist this past summer.

His drawing is composed of two creatures. 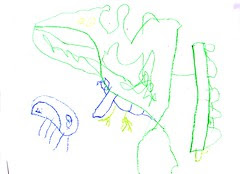 creatures
Originally uploaded by Teckelcar. The small blue figure is, according to Max, very cute and it has a shell. He is running away and is going to hide in his shell. It has teeth and is smiling. The spots on the shell have something that comes out and hurts the bigger creature. I think Max went onto say that it takes off mean arms. I’m not sure because he was bouncing about as he told me.

The larger, green creature is trying to eat the other one, but it has only two baby teeth. It is mad and mean. When he finds the small one hiding in his shell he will think it is a ball. Max went on to say that he forgot to make the arms. Then Max took the picture back and added “mean arms.”

It is fun now that the Max and Rebecca can draw pictures and have a story associated with them.
Posted by Sarah at 1:20 PM