Artist of the Week: Tall!

Every night just before bed, there is an explosion of Lego building activity from Nate and Jake. When they are particularly proud of their creations they bring them downstairs for me to photograph. We hit upon the photographs as being a good alternative to the boys trying to preserve their creations. There is far less arguing and hard feelings when something gets knocked over.

A few weeks ago Nate came downstairs with this particularly tall Lego building. 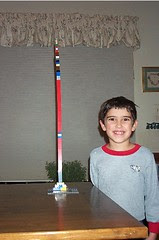 tall
Originally uploaded by Teckelcar. It was a bit tricky, but he was able to maneuver it downstairs and place it on the table. I love how the pride of accomplishment shines from Nate’s face. And I was impressed that in his original construction he built the structure on a wide base so that it would not tip over.

It came apart when he was carrying it back upstairs, but he was satisfied that its glory had been captured with the camera.

He then wanted to know if this would go up on this site under Artist of the Week.

So here you go Nate, Artist of the Week.
Posted by Sarah at 1:13 PM