Hey! What's All This White Stuff?

Winter finally arrived last night with a very squishy thud. It rained all day yesterday (Saturday) with a small attempt to convert to snow at around 6:00 pm. It wasn’t until 9:00 pm that the snow started to come down in earnest.

This morning I sent the kids out into this: 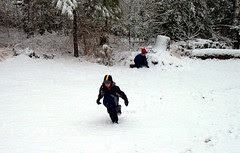 snowboys
Originally uploaded by Teckelcar. We got about 2 to 2 ½ inches of very wet snow. Jake and Nate rushed outside at about 8:30 am. Nate paused long enough to eat half a banana bread muffin and Jake went outside without any breakfast (his choice). Max and Rebecca elected to have a leisurely breakfast and did not join their brothers until after 9:30.

They all had a marvelous time outside. Jake and Nate tried to sled our embankment, but it was not really happening so they moved down towards the creek. The creek (and I used that term loosely) is essentially a picturesque drainage ditch along the edge of our property. 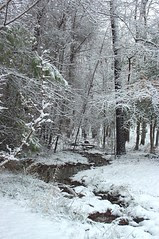 creek
Originally uploaded by Teckelcar. Max and Rebecca tagged along with their older brothers. At that point I leaned outside and told them to stay away from the water. There was much moaning and groaning, but they did. Sort of.

After 45 minutes or so Rebecca came back inside while the boys remained outside in the snow. Half an hour later the doorbell rang. I went to answer it and found a thoroughly drenched Jake standing outside. He told me with a very big smile that he had kept Max and Rebecca away from the water, but that he hadn’t done such a good job with himself. He had reached too far and had fallen in. He floundered for a bit and his two brothers helped him up to the house. The amazing part was that they remembered to bring the sled back and Jake’s boots.

Jake’s snow pants were soaked through to his pants underneath. His jacket was a little better, but not by much. One boot was entirely filled with water and weighed a ton; they ended up bringing that home on the sled. After a quick change of clothes for Jake they all settled down for lunch.

The rest of the day was uneventful (except for a visit from Aunt Meryl which I’ll write about tomorrow) and by the sundown most of the snow was gone.

So that is pretty much it for our biggest weather event of the season.
Posted by Sarah at 7:19 PM