Thursday Three: Can We build It?

Yes we can! This week’s Thursday Three from Terry is all about public spaces. To whit:

Yes, once more that music means it’s time for America’s Most Popular Internet Game, the Axis of Weevil Thursday Three, which is almost like the more aged Friday Five, excepting that it is on a Thursday, and we only have three questions.

LIKE THE ONES WE HAVE TODAY, furnished to us by famed back deck carpenter Jimbo Smith, PhD (Posthole Digger), who decided we should concentrate this week upon the king of the fine arts, the noble craft of architecture, specifically as applied to those structures built by taxpayers.

Now then, think hard and either leave your answers in the comments below, or leave a link to your answers on your blog. Remember, anyone can play along, even if you don’t pay taxes.

Of course this means I get to include pictures! Whoo-hoo!

For the purposes of this week’s questions I will define my hometown as being the place I live in now.

1) Originally I was going to cheat and use Richmond’s Old City Hall, But then I remembered this little gem of a building: 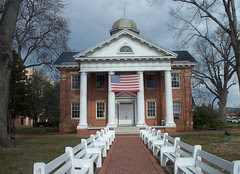 oldcourthouse
Originally uploaded by Teckelcar.
There is a plaque out front which has the following history of the building.

“This area, known as “Cold Water Run,” is the site of the first ________ County courthouse, erected in 1750. In 1917 it was demolished and replaced with a larger Georgian Revival brick building that served the county until the 1960s. The most famous trial here was that of seven Baptist preachers for breach of ecclesiastical law in 1773. In 1780-81, Governer Thomas Jefferson designated the courthouse village as a training post and encampment of all reinforcements for the Continental armies from the southern states.”

And here is one more view from the side. 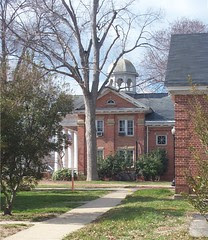 courthousesideview
Originally uploaded by Teckelcar. 2) Ironically the worst public building is a stone’s throw away from the prettiest. Here it is in all its modern glory. 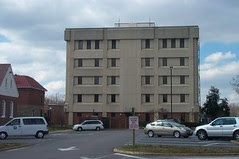 countyoffices
Originally uploaded by Teckelcar. The brick and stone structure to the left is a replication of the old county jail.

To add further insult it also has this addition with a trailer out front. 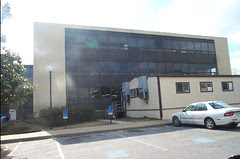 countyoffices2
Originally uploaded by Teckelcar. I will, however, note that all of the people inside are unfailingly polite and helpful.

3) My favorite modern public building is Monona Terrace in Madison, Wisconsin. This structure was a very long time in coming, if you click here you will get its timeline. Technically it does qualify, but only because it took 60 years before it was actually built. I have been inside and I found it to be a very bright and airy structure. My only complaint is that the rugs have a horrible eye-twisting pattern.
Posted by Sarah at 3:30 PM