Normally my children are happy to go to sleep in their respective beds; the trick is getting them to stay there. Once in a blue moon we will get an odd request to sleep somewhere else.

Nate sometimes sleeps in the quest room when Jake is particularly chatty or has a loud cough (Jake and Nate share a bedroom). Jake likes to sleep on the floor in his sleeping bag, but he always ends up back in his bed. These are very reasonable requests.

A few weeks ago Nate picked a very odd spot to sleep in. There is a unit in their room that has shelves up top and a rolling bin below. This is what it looks like: 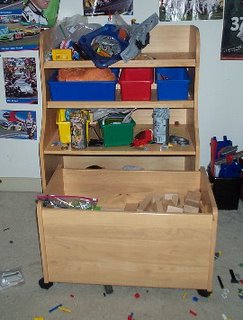 That night Nate wanted to sleep on the floor tucked under the shelves and behind the bin. In his little hidey hole he brought with him the Lego bin and nothing else. I tossed in a pillow and he was all set.

Later that night, after they were all asleep I snuck in and took a picture of Nate all curled up. 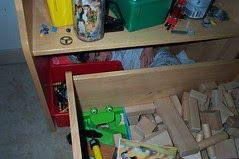 curledup
Originally uploaded by Teckelcar. The next day he awoke none the worse for wear, but he did admit it was not the most comfortable place to sleep.

I think he originally snuck back there to get some extra playtime. The idea of sleeping there was just a cover-up. By letting him sleep there I think we will not be having any repeats.
Posted by Sarah at 5:36 PM