Lately I have been obsessing about the upcoming Dachshund Club of America 2006 National Specialty. It is an annual event that is held in a different region each year. This year it is being hosted by the Dachshund Club of Metropolitan Atlanta at Callaway Gardens in Pine Mountain, Georgia. A National Specialty is a dog show that is devoted to one breed (in this case dachshund) and is held under the auspices of the national breed/parent club. All AKC recognized breeds have a national club.

The whole shebang this year runs from March 25th to April 9th. I would dearly love to go to all of the field events, the field trial and the earthdog events in particular, but realistically I can only attend the main specialty show on April 6th-8th. After a lot of consultation with Diane I have decided to enter Crunch. At 13 ½ this will be his last National and he is in amazing shape. We thought it would be fun to enter him in the stud dog class. Here is a definition of the class:

For stud dogs and at least two and no more than four of their get (i.e. offspring). Stud dog must be entered in the appropriate Stud Dog Class and must be shown in the ring with its get. Owner of stud dog need not necessarily be owner of get. Get only to be judged, based upon their merits. While the merits of the stud dog are not considered in the placement of the entry, the stud dog must be examined to determine if it has a condition that would require its disqualification or excusal under Dog Show Rules, AKC policy, or the standard (written description of the ideal dog) for its breed. Get must be entered in a Regular Class, Best of Variety Competition, or some other Non-Regular Class.

Diane has ready access to Crunch’s latest litter and we thought it would be quite a statement for the old man to trot into the ring with two of his very young (Not even a year old!) get.

Of course the big question is which of the puppies will we bring? I decided not to bring John because three days cooped up in hotel room with possibly a female dog in the vicinity would probably destroy Crunch and John’s relationship. The red dogs get along very well and I want it to stay that way. That leaves the puppies from the latest litter. Diane and her family got a gander of Brad this past weekend and sent me these pictures: 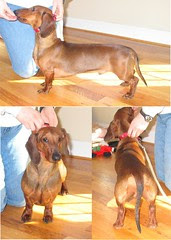 Brad
Originally uploaded by Teckelcar. This is a quote from the accompanying note:

Here are some fresh pictures of Brad. Happy little guy and coming along nicely. Still immature but for his age, this is a pretty nice puppy. His owners are wonderful and spoil him rotten.

So it looks like Brad will be going to Georgia with either Val or Trudy.

I can see a very strong resemblance to both Crunch and John. Brad has a nicer topline than John and a better head than Crunch. The immaturity is to be expected. Crunch really did not come into his own until three and it looks like John is the same.

In addition to Stud Dog Class I’ll be entering the old man in the Veteran Class (dogs seven years and older). I figure he’ll be one of the older if not oldest entry and quite possible the fittest. It will be quite a statement to have him entered in both Veteran and Stud Dog. It should be very interesting. I’ll be bring my camera and I promise to post pictures.
Posted by Sarah at 2:44 PM