I was on the phone with Meryl the other day (what a shock we usually chat at least once a day) and I was asking her what treat we should make for when she comes over. Nate was dancing about and interjected that we could buy some cookies. I paused in my conversation with Meryl and looked down at Nate and reminded him that we normally don’t buy cookies we make cookies. Nate then bounced about some more and agreed with me and then stated, but we don’t make candy!

At that moment I remembered a type of fudge, called penuche, which I used to make when I was a little older than Jake.

This prompted me to look through my cookbook collection for a charming little book that I used to make penuche. And here it is: 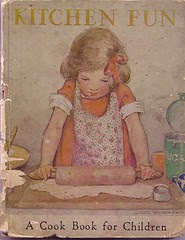 kitchenfun1
Originally uploaded by Teckelcar. It is from 1932 and was originally published by The Harter Publishing Company (which seems top have dropped off the face of the Earth) and was later reissued by Gramercy Press on June 27, 1993.

The book starts with “Rules for Little Cooks” on the inside front cover: 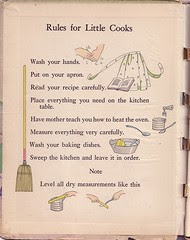 kitchenfun2
Originally uploaded by Teckelcar. Yes, it is a bit dated with its gender stereotyping. But you must remember it was a product of its time. I love the illustrations which are peppered throughout the book.

And here is the Penuche page: 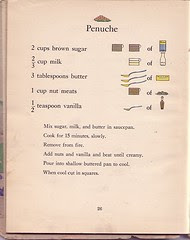 kitchenfun3
Originally uploaded by Teckelcar. The only changes to the recipe that my family made were omitting the nuts and cooking the penuche until it reaches the soft ball stage (and click here if you want to see the QuickTime movie version) before adding the vanilla and mixing until creamy.

It is a very easy treat to make and very tasty.

I’ll post more from this book as I try things out with my children.
Posted by Sarah at 11:54 AM