And Now for Stories

Of course no trip is complete without stories.

When we arrived Friday we checked in, unpacked and rested a bit. Then it was time to hit the beach.

This is the view from the walkway/balcony in front of our room. 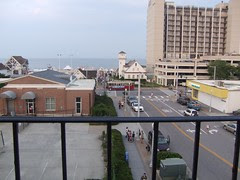 oceanview
Originally uploaded by Teckelcar. As you can see it is a short walk to the beach (even for four year olds) and we really did have an ocean view.

Once on the beach we found a good spot and settled in. Larry and I sat on our beach blanket and the kids played in the sand and the surf.

Like most parents, I never completely relax on the beach when the kids are with me. I keep an eye on them to make sure that don’t stray to far away or head into deep water. Generally they are a good bunch and stay fairly close except Nate. He kept drifting (unintentionally) down the shore as he frolicked in the surf. Periodically we would call him back and all was well.

Virginia Beach is a very family friendly place and as a result there were a fair number of kids about. There was the adorable toddler lurching about with his siblings under the watchful eye of their mother. Kids would stroll by with a parental figure in tow. Most of the time you could tell which group a child was from, but there were exceptions. For us it was The Sand Monkey, aka Kayla.

The Sand Monkey suddenly appeared and plopped herself down next to Rebecca. She seemed nice enough and the two girls happily played in the sand together. 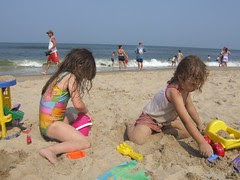 Rebecca+SandMonkey
Originally uploaded by Teckelcar.
We named her The Sand Monkey because of the little monkeys on her top and how her skin tone and hair perfectly matched the sand all over her. Larry was the one to tease out her name, but we couldn’t figure out where her group was. She looked to be about Rebecca’s age and was far too young to be by herself. After about 20 minutes she got up and wandered off. I watched her for a bit, glanced away for a moment and then she simply vanished.

It was a bit disconcerting for me, but there really wasn’t much I could do since I couldn’t see her anymore.