Yesterday we had the two soccer camp coaches over for dinner (spaghetti and meatballs a perennial favorite in our family) followed by a baseball game. It was a make-up game for Nate’s team and the last one of the season.

It was a perfect night for baseball, the temperature had dropped to the low eighties and the bugs were not out in force. All we needed were hotdogs to make it a classic baseball experience. We arrived just after the game had gotten under way. Since Larry was on the field coaching, it was up to me to give the guys an explanation of what was going on.

Fortunately I like baseball and I have even played softball, so I do have a clue.

Anyway, when we arrived Jake promptly disappeared to the adjoining playground. Max and Rebecca, however, were stuck with watching the game. I wanted to actually watch the game and be able to answer any questions our British guests had. Of course I had to take pictures too.

Here is Rebecca with George. She got mad at me when I snapped this. She wanted to take the pictures, not be in the pictures. 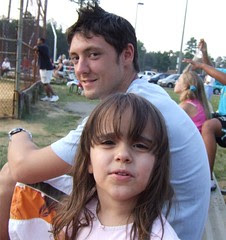 Max was a bit shy at first, but warmed up to the idea that he was with Craig, who had hair just like him. He asked Craig to sit next to him at dinner for just that reason. (It’s hard to be the only blond in family with otherwise very dark hair.) 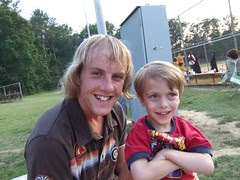 Craig+Max
Originally uploaded by Teckelcar. There is such a cute smile on Max’s face.

But I digress; we were there to watch baseball.

Shortly after we arrived Nate stepped up to bat. I was able to catch him just after he hit the ball and was stepping off towards first. 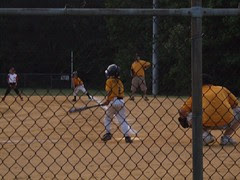 Nateatbat
Originally uploaded by Teckelcar. You can just make out Larry; he is the first base coach.

The team had a good night and our Nate was 3 for 3 at bat. Not bad for a kid who had been careening about a few hours earlier at soccer camp in 90+ degree weather.

Afterwards we brought out a full sized bat to give the guys a chance to learn how to hit.

First off Larry gave them a brief lesson on how to hold the bat and proper foot position, then it was time to play. George was first up and promptly smacked the ball to the outfield.

Georgeatbat
Originally uploaded by Teckelcar. It was a very impressive showing for someone who had never played before. He even had a fairly level swing. At one point he said “I’m going to chuck soccer, this is easier.”

After quite a few solid hits from George, it was Craig’s turn. For whatever reason, I was unable to take a decent picture. Then I remembered that our new camera could also be used as a camcorder.

So I present to you Two Brits Playing Baseball.

George is pitching to Craig. The voice you hear is me with the added bonus of Nate’s appreciative shout when Craig knocks one to the outfield.

Both of them had a good time watching the game and had a wonderful time hitting a few balls afterwards.
Posted by Sarah at 12:11 AM