Last weekend was the 13th annual North American Sand Soccer Championships being held in Virginia Beach, VA. Jake’s team had decided months ago that this would be their final tournament.

I pulled the boys from school Friday. (Yes I know, bad mommy, but at this point precious little education is going on. It’s just glorified babysitting as the school year enters its final days.) So we could head on down to Virginia Beach early, beat the traffic and get a little beach time.

Traffic was light and we arrived just after 2:00 pm.

The hotel was a bit tatty and worn, but was an easy walk to the beach which is wonderful.

We got to enjoy a little surf. 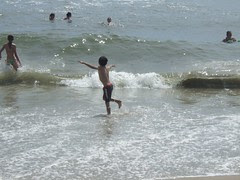 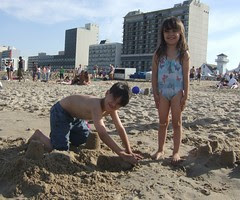 jake+rebecca
Originally uploaded by Teckelcar. Watch quite a bit of soccer.

sandsoccer
Originally uploaded by Teckelcar. And dig our toes in the sand. 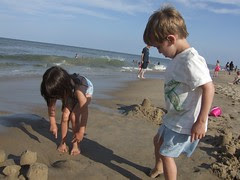 toesinsand
Originally uploaded by Teckelcar. The team did alright. They stomped their opponents in the first game 4-0 and were then stomped in turn by their opponents in the next game 0-4. Their last game was Sunday Morning at 8:00 am and they fought their opponents to a tie 1-1. They actually out shot their competition, but they kept just missing the tiny net. They did a bang up job and we had a great time.

Rebecca was very sad to leave and burst into tears when I started to pack up the room. I think we will be returning to VA Beach sometime this summer.
Posted by Sarah at 3:11 PM