I was looking over my latest batch of photos from soccer camp and I thought I would share this final batch with y’all.

I love this picture of Max in action.

Maxgoal
Originally uploaded by Teckelcar. He is in mid-stride and is completely off the ground along with the ball. He has such wonderful expression of concentration. He is going to make that goal!

Here are two photos from a scrimmage on the last day. In the first one you can see how hard Nate is trying to reach the ball. He is at top speed and is bending towards his objective.

soccernate2
Originally uploaded by Teckelcar. In the next picture I captured Jake in mid-stride.

soccerjake2
Originally uploaded by Teckelcar. I really like it when I get a photo of them with both feet off the ground when they are running.

And here is my last photo from camp. It is of my three campers and the two coaches, Craig and George. 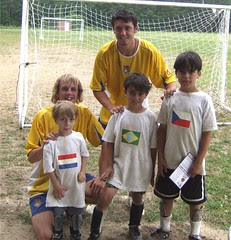 soccerboys
Originally uploaded by Teckelcar. As you can tell by Jake’s expression he was less than thrilled with the photo session, but I didn’t let that stop me. All five are in their hot, sweaty and very grubby glory.

I think they all had fun the past week, even though the temperatures were well over 90 for a good portion of the week.
Posted by Sarah at 1:50 PM