Down on the Farm

Several weeks ago we got a bunch of freebie packets of seeds from a local contactor trying to drum up some business. They had set up a table at the entrance to the soccer fields and were giving away free coffee and Krispy Kreme (!) doughnuts. Along side the food was a big basket full of seed packets, ranging from flowers to vegetables.

Max selected cucumbers, Jake green beans and Rebecca fished out some asters. Nate was uninterested; he was more intent on goofing off with some of his friends than picking out boring old seeds.

For a couple of days my would-be-farmers pestered me to plant the seeds. I finally relented and pulled out some egg cartons and potting soil. We had fun dumping in the potting mix and poking in the seeds. Initially I had the cartons loose, but they kept drying out. I then hit upon the idea of placing the cartons in one of my sheet cake pans. This did the trick. Shortly afterwards little green shoots starting poking out. 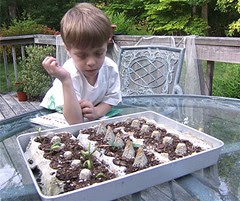 This past weekend I transplanted the beans and the cucumbers to our deck planters. The beans should be alright,

greenbean2
Originally uploaded by Teckelcar. but the cucumbers will be a bit tricky.

cucumbers
Originally uploaded by Teckelcar. I think I’ll be able to train them to grow along the railing. If not, it is not a big deal since I haven’t actually paid for the seeds.

I know they would all do better in a real garden, but that really isn’t an option here. The deer (aka tall rats) are quite brazen here. On numerous I have found hoof prints under the deck. I would have to put any sort of a vegetable garden in a fully enclosed area (i.e. roof and all) to protect the plants. So we are limited to the deck. I have had a measure of success with my big pots with tomatoes. Hopefully the deck boxes will work out.

The asters are not quite ready and are still in their egg box nursery.

asters
Originally uploaded by Teckelcar. They should be fine in a deck box.
Posted by Sarah at 4:54 PM