Last Wednesday I got treated to a full afternoon of concerts. 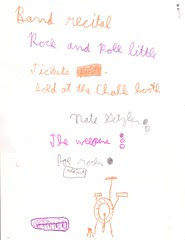 poster
Originally uploaded by Teckelcar. As you can see on Jake’s poster even Nate participated, which was remarkable because just that morning he had a tonsillectomy.

Originally it was just Max and Rebecca in their little combo “Rock and Roll little.” They set up a toy keyboard next to Max’s drum kit up in their room. Jake acted as a promoter and ticket seller. He made up both the poster and the tickets. Then he set up shop inside the easel downstairs and sold the tickets.

I happily went along with the game. I got my ticket and went upstairs for the concert.

The music was a bit, how shall I put it..., uneven. Max bashed the drums with enthusiasm while Rebecca noodled on the keyboard and sang disjointed words and sounds. I think they need to do a little more practice before their next gig. They are not ready to quit their day jobs, but it was very cute.

Once they were done I then attended to the pressing matter of laundry when suddenly I heard the piano downstairs.

Apparently Nate had woken up and had decided to practice.

After lunch I was rounded up for Nate’s concert. He elected to play piano and had a little stool next to him on the bench acting as a drum.

His performance was a bit more polished and melodic, but very brief. This was about what I would expect from someone who had studied piano for several years and was just recovering from surgery.

Afterwards we all had popsicles.

Nate is still under the weather, but he is quite a trooper. I fell bad that we put him through this, but he missed a ton of school last winter and this should help him stay healthy.

Hopefully he’ll be able to do a few encores after his next concert.
Posted by Sarah at 2:26 PM