Yesterday afternoon I was in the front yard clearing out some of the excess vegetation in front of the house and measuring windows when I noticed something on the front lawn. My first impression was that it was a bicycle helmet, namely my helmet which is black.

Why on earth had the kids dragged my helmet out and dumped it on the lawn?

Then I noticed that the helmet had something sticking out at one end. Something that looked remarkably similar to a small head.

Then it stuck me, it was not my helmet, but a rather large turtle.

Since I had my yardstick with me I went out and measured it. I happened to be on the phone with Larry and he got to experience my excitement first hand. He then, very sensibly, suggested that I take a picture of the turtle. 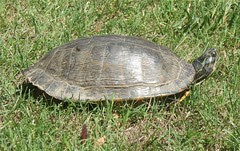 turtle
Originally uploaded by Teckelcar. This is the beauty of a turtle. You can walk up to one, measure it with a yardstick, go back inside to fetch the camera and odds are it will still be there where you left it.

Here is another picture with the kids. As you can see it is a large turtle, the carapace is nearly 10 inches long and 6 inches wide. It is a bit bigger than the average size of 8 to 9 inches long. 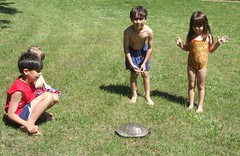 turtle+kids
Originally uploaded by Teckelcar. The turtle patiently waited until the children backed away. Then it beat a hasty retreat to the bushes to hide out until the coast was clear.

I hope we get to see the turtle again and that it avoids the cars and our dogs. Crunch actually ate a turtle once and I hope he doesn’t repeat that particular feat of marathon chewing. I didn’t realize he was gnawing on a turtle until an hour later and then it was too late.

Poor thing, I felt really bad about that particular victim of my dogs predations.

Update:
Well it looks like that the turtle may be a Cooter, either Florida or River. Or it could even be a Yellowbellied slider.

My best guess is that it is Florida Cooter. Our turtle most resembles the pictures of the Florida.
Posted by Sarah at 7:41 PM