This week the boys are all at soccer camp, even little Max is going to the 1 ½ hour mini-camp. Rebecca, in light of her less than enthusiastic performance in her first (and possibly last) soccer team, is only going along for the ride and is not participating.

The camp is being held in Dinwiddie County, about 30 minutes from our house. Last Friday I got a desperate call from the organizers wanting to know if I could possible take in one of the coaches for the week. The coaches are from the UK and they tour around the US all summer long going from camp to camp, staying with host families.

I said it was a possibility, but I have to talk to my husband first.

Well, after a brief call to my husband I called back the folks at Challenger Sports and said we were willing, however...

This didn’t seem to faze them and it was arranged that we would be hosting one of the two coaches.

At this point I’d like to mention that it was arranged that we would meet the coach at 6:00 pm on Sunday at the soccer fields.

On Sunday we got ready for our guest and went to the meeting point.

And waited some more.

All the while I was checking our home voice mail.

He was an hour away and could we please call him at the following number.

The number was no good.

Well it turns out that the poor guy was fried, having just gotten stateside the day before and then subsequently driven down from Baltimore. The main office had told him that he would be dropping off his partner with the other host family and then head over to our house (this was news to me). They had arrived late at the first house, determined that the two houses were too far apart and decided that they would both stay put.

Okay, that works for me. We can stick our air mattress in the guestroom and they can figure out who gets the bed.

Anyhoo, today was the first day or soccer camp.

The boys had a very good time and I got this fantastic shot of Nate just after he tried to kick a goal.

flyingshoe
Originally uploaded by Teckelcar. As you can see his cleat came flying off. Sadly the ball did not go in the goal, but I got this great picture instead.

The coaches seemed to be a nice couple of guys and they interact well with all the campers. At one point Max buttonholed one and they had a very long conversation about Star Wars. 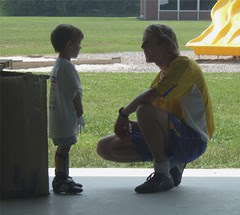 max&coach
Originally uploaded by Teckelcar. The coach really paid attention to Max and did not just brush him off after a few minutes. It takes a fair amount of patience to really listen to a four year for any length of time.

We will be spending the rest of the week in Dinwiddie (I love saying Dinwiddie, typing it is fun too). It’ll be hot this week, but it looks like it’s going to be fun.
Posted by Sarah at 11:53 PM