The Big One Oh

Today Jake officially turned ten years old. We had his party last Saturday at our local laser tag establishment, Laser Quest (they have a web site, but I found the site to be very loud and annoying).

Jake had three of his friends (Davis, Chris and Ian) at the party. They along with Nate, Aunt Meryl and Ian’s dad had a great time playing laser tag. Max and Rebecca are much too young and they have some sort of misty junk that is not good for people with compromised lungs.

Once they were done playing we settled down in the party room. While we waited for the pizzas to appear we noshed on leftover cookies and brownies from that mornings dog show. I didn’t intend to bring the leftovers; I had simply left them in car. But, it turned out they were nice to have at the party.

Once we were done with the pizza it was cake time. 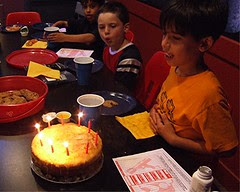 b-dayboyJake
Originally uploaded by Teckelcar. I got Jake half through blowing out his 10 (!) candles. I can’t believe it has been ten years.

We had a great time at the party and it was very pleasant, except for one thing. 10 minutes before our time was up an employee poked his head in and said he would be happy to help us clear out in the next few minutes. Nooo, we still had 10 minutes before we were scheduled to leave. Larry, in fact, looked him straight in the eye and confirmed this. The guy nodded and left the room. Ten minutes later we were done and out of the room exactly on time. It would have been better if he just gave us a 10 minute warning and not tried to push us out before our time. Otherwise it was tons of fun.

Today we continued our tradition of cake for breakfast and otherwise had a quiet day.

Happy birthday to my big boy.
Posted by Sarah at 11:22 PM