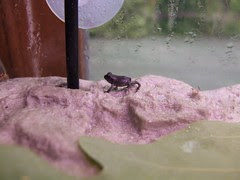 littlefrog
Originally uploaded by Teckelcar.
On Tuesday Nate noticed that one of the froglettes was struggling in the tank. It kept falling backwards and landing upside down. Fearing that the little guy was drowning, I scooped him up and deposited him on the turtle dock.

The little guy stood there, probably a bit stunned by the experience, looked around and decided to stay put. I put a leaf in the tank to provide it a bit of cover and spent the rest of the day watching it.

He is so tiny, he would fit neatly on top of a dime. At first he had a bit of a tail, but amazingly as the day wore on he reabsorbed it. Thus we now officially have a frog. 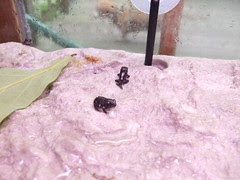 frogs&leaf
Originally uploaded by Teckelcar.
As the days passed a few more froglettes joined our first frog on dry land (or rather Styrofoam). Most of them we rescued from the bottom of the tank, but a few figured it out on their own. Amusingly one or two upon rescuing would immediately plunge back into the water; they were not quite ready.

The biggest puzzle was what to feed them.

I tried a pile of fish flakes, but it was ignored.

I then went to the exotic pet store and asked for the smallest live food for frogs and ended up with a bag of baby crickets. The smallest ones were about half the size of the frogs and the largest... well, the biggest one actually threatened a frog. It drew itself up and waved its antenna at a frog and then stamped away. The frog, meanwhile, was completely nonplussed. It just sat there absorbing it's new environment. 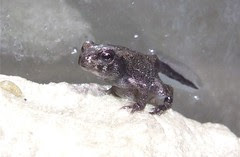 newfrog
Originally uploaded by Teckelcar.
This morning we had five little frogs arrayed on the dock. It was nice out and we had a little time before the bus so I decided it was time to release this first batch. At first there was a bit of protest from the kids, but when I pointed out that we couldn't feed them properly they agreed it was for the best.

At this point one more frog heaved itself out of the water and joined its compatriots. He still has quite a bit of tail as you can see in the photo, but he was deemed ready to go. 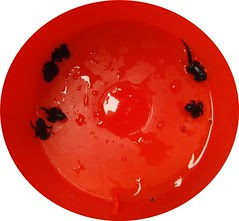 bucketo'frogs
Originally uploaded by Teckelcar.
So six little frogs were loaded into Jake's orange bucket and taken down to the stream.

Jake and Nate grabbed their back packs and the rest trailed us, still clad in their pajamas including our house guests' two daughters.

A shallow stretch of the stream, not far from where they were originally caught was selected. We could see in the shallows a few tadpoles wriggling about. The wild ones were not nearly as far along as our crew. They firmly remained in the tadpole stage, nary a leg in the bunch.

With little ceremony I dumped our frogs back into the stream from whence they came. kids&frogs
Originally uploaded by Teckelcar.
And here you can see Rebecca, one of the girls and Max watching our frogs in their newly freed state.

I don't know how happy they are, but they certainly looked cold when they hit the water. The good news is that Jake and Nate spied a fair number of water bugs just the right size for our frogs to eat.
Posted by Sarah at 11:58 PM