Where is My Little Sparkler? 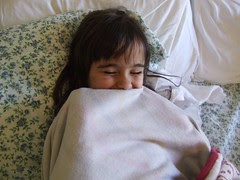 gigglygirl
Originally uploaded by Teckelcar.
Rebecca, my little sparkler, has not been feeling well. In fact she has been ailing on and off for the past month.

It starts out with her crashing during the day and sleeping straight through dinner and on through the next day or so. She barely eats and drinks until she starts to rally after a few days. In the meantime, all she does is sleep.

When she is better she is almost her old self. Sadly, it only lasts about a week and a half. Right now she has started her third cycle of the mystery illness.

When it first struck she had the added bonus of nausea. I brought her in to the pediatrician's office and she tested positive for strep throat. One shot of antibiotic and a scrip for Zofran later we were sent home.

The second time she was again nauseated, I brought her in she initially tested negative for strep. The Dr. and I decided to wait and see. After two days of no improvement I brought her back in. At that point she evidenced signs of strep so we decided to treat it as such. I was already concerned about other possible causes and asked for her to be tested for tick borne illnesses. We live in tick central and last year our neighbor was diagnosed with Lyme's disease. For good measure, the Dr. also had her checked for mono.

ready to go
Originally uploaded by Teckelcar.
All the tests came back negative.

Now that we have entered her third round I am very concerned about my little girl. I'm waiting on a call back from her pediatrician. I don't see any point in hauling her back in unless we have a plan. They really can't test for anything else there at the office. If further testing is warranted I might as well go straight to the lab, skipping another co-pay and unnecessary poking and prodding. The poor thing is feeling wretched already, I don't want to add to her misery. Thankfully she hasn't been nauseated this time around.

Hopefully I'll get my little sparkler back soon.
Posted by Sarah at 11:08 PM