Max and His Big T-ball Weekend 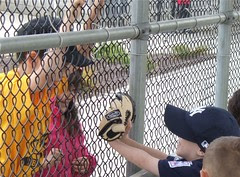 Nate, Rebecca and Max
Originally uploaded by Teckelcar.
Max had a very big weekend with his t-ball team.

They had regularly scheduled games on Saturday and Monday plus a make up game on Sunday.

Saturday we had a conflicts between Jake's and Max's game so we all couldn't go to cheer the t-ball Yankees on. Mind you it's really funny that he is on the Yankees because Larry is a huge Mets fan and I've been reading "Now I can die in peace" a really good book about the BoSox and well, Yankees are pretty much evil in the book.

Anyway Larry could only stick around for half an inning, so Max only had Nate, Rebeca and me to root for him and his team. But that was fine, he was so pleased when Nate and Rebecca visited him at the dugout. It's hard to see, but he is beaming at his sister.

Sunday we all got to watch our favorite t-baller in action.He was again delighted to have us there, especially with his father keeping the official score. He would wave to us when ever he was in the dugout.

He likes playing ball, even though he does get a bit bored out on the field. The funniest moment was when he was spinning around in the outfield with his glove balanced on his head. It was a classic t-ball moment.
Posted by Sarah at 12:51 AM