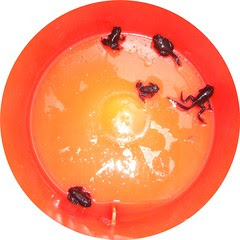 Finalfive
Originally uploaded by Teckelcar.
Last Sunday we bid farewell to the last of our tadpoles. Only five were left, four were ready to go and one was stubbornly refusing to leave the water. The last holdout was unceremoniously dumped on the turtle dock to see if it could handle dry land. It tried to wriggle back to the water , but after a few moments it adjusted. A good thing too, because there was no way I was going to maintain the tank for just one froglette. It is a strapping fellow compared to its short-tailed and tailless brethren.

So off to the stream with the final five.

It was a damp and squishy walk, just the kind of day to re-release amphibians back into the wild, or at least the suburbs. 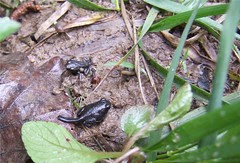 freedom
Originally uploaded by Teckelcar.
They looked happy enough in their new environment. The smallest one looks a bit sickly. It is quite thin and I fished it out of the water when I saw it sinking in the water. It perked up on the land, I hope it makes it.

For those of you keeping score we released 33 tadpoles and only lost four. One of the deceased looked a bit odd and the other three ended up drowning when we ere less vigilant about scooping them out. I would say that is a pretty good survival rate, just under 88% made it back into the wild. They got quite a head start over the tadpoles left behind. 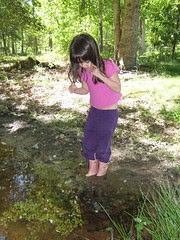 Rebecca in the mud
Originally uploaded by Teckelcar.
Posted by Sarah at 11:53 PM