Artist of the Week: Cards & Blocks 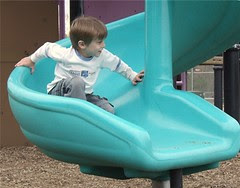 slidingMax
Originally uploaded by Teckelcar
This week's artist is Max. This particular shot was taken during one of Nate's baseball games. The ball field is located in a schoolyard and features a playground less than 10 yards away. This proved to be quite a boon for me when watching a game with my entourage. I could actually watch a game in relative peace, I didn't have to listen to small people complain about how bored they were. Instead I'd send them over to the playground.

Anyway, about a week and a half ago Max proudly dragged me to his room to show me his latest creation. He had been building away for a few hours that morning and this was what he made: 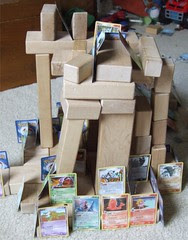 Cards&blocks2
Originally uploaded by Teckelcar
It is a very elaborate tower that is decorated with the cards from his Pokemon deck. Each card was carefully placed facing outwards at just the right angle. I think it is quite a feat of balance, both in the cards and in the blocks. Pretty impressive work for a five and half year old.

And I know it was all his doing since both of his older brothers were at school while Max built his creation. The cards were a very unique touch. Neither Jake nor Nate have ever done such a thing before. The whole project was entirely Max's idea. 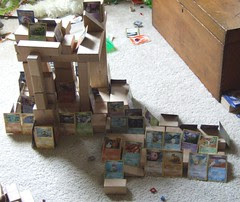 Cards&blocks
Originally uploaded by Teckelcar
I actually felt kind of bad when it was time to take the whole thing done. Max, however, handled the demolition just fine. He knew a couple of pictures had been taken and thus the building had been preserved for posterity.
Posted by Sarah at 11:57 PM