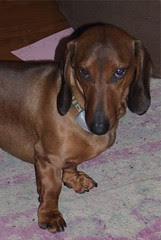 Sunday I was out on the deck reading a book with John puttering around at my feet and Crunch nosing about on the lawn. We were quietly enjoying the lovely weather, far nicer than this weekend by the way, when John started baying like a hound possessed, shot off the deck and charged into the woods. Suddenly he let out a terrible squeal/ yelp with some barking, almost as though he was in a fight and getting the worst of it.

I dashed off the deck not knowing what to expect. As I followed John’s path to the woods I noticed that Crunch was still poking about in the grass, oblivious to John’s distress.

Just as I reached the wood’s edge I was brought up short by a doe springing away, not more than 10 feet away from me. John was bouncing about with his right front paw uplifted, barking at the fleeing doe. When the doe was long gone John finally calmed down enough for me to lure him in and make a grab. He was limping and obviously injured, but it wasn’t clear how he was injured.

Being of sound temperament I was able to manipulate John’s right foreleg in all sorts of ways without any protest. He didn’t have a mark on him, but something was wrong. Maybe the deer had kicked him, I couldn’t tell. I decided to wait and see. Other than being a gimpy little dog he seemed fine, it didn’t seem worth the expense of going to the emergency vet when it could be something simple as a sprain.

Monday he was still limping about and I decided to take another look. His leg seemed just fine. Then I noticed that his outside right toe was damp from his worrying it. I gently moved the toe and saw him flinch. Ah ha! It looks like he might have broken a toe. I consulted with a few dog people and decided that he could ride it out until Tuesday. At $70 just for stepping into the exam room at the e-vet and lord knows what for miscellaneous tests and x-rays, he could wait for a visit with our regular vet. Quite honestly there is not much they can do for him. I know with people, the broken toe gets taped to its uninjured neighbors and that’s it.

Tuesday I was able to bring John in to our regular vet clinic. We were squeezed in as a walk in and got to meet all sorts of dogs as we waited our turn. When we finally got to see the vet I told him what I thought was wrong. He then pulled and poked John’s foreleg a dozen different ways. After a very through examination the diagnoses was to John: “Well your mom is right, it feels like you broke your toe.”

He could feel the toe grate a bit as he moved it to and fro. It could be a tendon thing, but it really didn’t matter, the treatment is the same if the toe was broken. He mentioned we could bandage the leg, but as he put it “there is nothing more pathetic than a bandaged dog.” That and the whole keeping the dog from chewing the wrap off. We elected not to do anything. John should improve over the next four weeks. 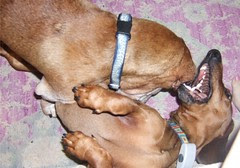 dogwrestling
Originally uploaded by Teckelcar
So we came back home with Mr. Boo-boo paw looking very sad until it was time to wrestle with Crunch.

It was been a week now and already he is limping less. I’m just glad he did this before I entered him in a bunch of dog shows. Now I know not to bother until he is fully healed.

Silly boy, how he did this we’ll never know, John’s not talking.
Posted by Sarah at 11:24 PM