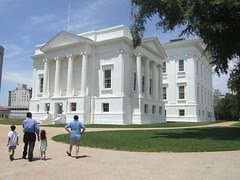 Capital
Originally uploaded by Teckelcar
As I mentioned Tuesday I took our house guests to the Capitol complex over in Richmond last Friday. Since Larry's office is on the Capitol square we decided to meet him for lunch, afterwards we could introduce us to some of his co-workers and point us in the right direction for a tour of the Capitol building.

Once we found a parking space we gave Larry a call and we met him outside his building. The restaurant he picked for us was a bit of a walk across the square from where we were. So we got a quick tour of the square as we cut across. We passed by the Governor's mansion and Larry noted that the Governor had the shortest commute in Richmond, barring those working from home. It's not even 50 yards from the mansion to the building housing the Governor's office. Then we skirted around the Capital itself.

Renovations had just been completed a month ago and the building practically had a pristine white glow about it. Gone were all the construction vehicles and the grounds no longer had a huge gaping hole in front of the building. As we passed by the south portico Larry noticed a co-worker up there being treated to lunch as part of a program she participated in. We gave a wave as we wound past onto our own lunch.

The spot Larry chose was Cafe Ole'. It is a very simple place with excellent Mexican food at great prices. The kids all had quesadillas and the rest of us had burritos or taco salads. Everyone was happy with their meal and we all left feeling full and happy. Now we were ready to explore the Capitol.

Larry had to go back to work, but he was able to do a little detour into the old Richmond City Hall. It's a gorgeous building the I've written about before, so I'll spare y'all the details. I will note, however, that our guests and Larry (who has only walked by the building) were all suitably impressed. Then it was up to Larry's office where we got to meet the people on his floor.

After a quick tour of his building Larry escorted up back across the capital square to the visitors entrance to the Capitol. During the renovations a massive portion of the hill that the Capital sits on was removed. An underground "Capitol Extension" was added and then the hill was filled back in. I thought that was a terrific solution for a location for the new visitor's center. The hill remains uncluttered and a whole wing was added to the the Capitol without marring the building.

The Capitol was quite a treat. We decided to do a self tour, because the younger members of our party would not tolerate and hour and a half long tour. So with maps in hand we forged ahead. If you click on the picture about it will lead you to a set of pictures from our visit. I didn't take any pictures of the new Capitol Extension, but it was worth going through it. It has all sorts of interesting information about the original design and the history of the building. The main building was what I focused on with my camera. The statue of Washington is unique, he actually posed for the sculpture. I loved its placement in the rotunda. I could go on about our visit, but it's late and tomorrow is a busy day.

If you are ever in Richmond and you have the time it is well worth a visit.
Posted by Sarah at 11:45 PM