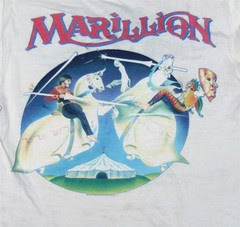 front
Originally uploaded by Teckelcar
Today as I was getting dressed I pulled an old concert t from the bottom of the pile.

Old doesn't quite cover the age of this particular shirt, as of June 28th the shirt will be officially 21 years old. I think that puts this shirt in the ancient category. If your shirt can legally drink, it's ancient.

I clearly remember the day I got that shirt. Larry and I were attending a concert at the Milton Keynes Bowl on our next to last day in England. Marillion were the headliners and were the main reason we were there. Larry was a fan and I thought it would be fun.

It was a beautiful June day and the venue was packed. It was festival seating and we had found a spot not too far from the front. The crowd was fairly well behaved throughout the opening acts, Gary Moore (very good), Jethro Tull (again good), Magnum and Mama's Boys (I honestly don't remember these two, we might have missed them). When Marillion hit the stage, however, it was like a huge wave of energy swept through the crowd. Everyone stood up and moved forward. I was literally swept off my feet at one point. Fortunately Larry had a tight hold on my arm so that we wouldn't be separated. I should have been frightened when my feet left the ground, but I wasn't. I was instead strangely exhilarated. I never felt in danger. After the initial surge the crowd settled and I was once again on my feet. 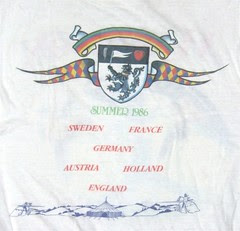 back Originally uploaded by Teckelcar
It was a fabulous experience and not one that I'll ever repeat.

We bought several shirts that day and I'm glad I did. The one I wore today I got entirely by chance. I was at the booth trying to decide amongst the shirts left when a man came to the booth to return a shirt. It had a very small hole beneath the picture on the front and he wanted to exchange it for a new one. They had sold out of that particular shirt and he settled on a different design on a "perfect" shirt. As the vender finished with the transaction I quickly asked if I could buy that shirt. he pointed out the hole and I said it didn't matter.

It was a combination of pure luck and quick thinking that got me this shirt.

The funny thing is once I get dressed I completely forget about what I'm wearing. Around mid day Jake asked me what did it mean and it took me a moment to realize he was asking about my shirt.

When I have worn the shirt I have gotten a few puzzled looks, only when I'm around Brits and Europeans of roughly my age do I get any sort of recognition. So for those of you unaware of Marillion, here is a clip I scavenged off of YouTube.

The group, much to my surprise, still exists and will be releasing their 15th album next spring.
Posted by Sarah at 11:43 PM