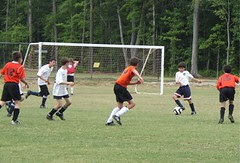 suncup Jake
Originally uploaded by Teckelcar
This past weekend was to be Jake’s last hurrah for organized soccer. The recreational soccer league season had ended May 19th, but Jake had joined up with a team that was competing at a local soccer tourney this past weekend.

The Sun Cup is an annual recreational soccer tournament that is hosted by one the many local soccer clubs in the Richmond area. The games are usually not too far from home, about a half hour away. Anyway it’s good fun and it gives Jake another chance to play soccer.

This weekend was to be a scorcher with the added bonus of Barry winding its way up the East coast. Saturday was as predicted, temps in the upper 80’s with high humidity. This normally would be a huge problem for Jake because, like me, he melts in hot weather. Fortunately there was a light cloud cover for the first game and Jake was able to push through. He was a little slower than normal, but not as dazed as he can get when the sun is directly beating down on him. Sadly his team (the Fireball Monkeys) was soundly beaten during the first game. We than had a little under an hour to kill before the next match. I ended up taking Max, Rebecca and Jake to the local supermarket/cafe to relax in air-conditioning and nosh on fruit from the salad bar. Meanwhile Nate and Larry had left after the first match to take Nate to his baseball game.

As the day progressed the clouds built up and the temps seemed to be dropping. Jake played with a lot more energy. Again our team lost, but this time they held the score to just 1-0. They didn’t qualify for the winners match up on Sunday, but they would still get to play one more time. The coach announced to the team that they would be playing rain or shine.

Sunday morning I awoke to the sound of rain beating against the skylight. My first thought was good! Jake loves playing in the rain and the temperature had dropped significantly. We doubled checked the tourney’s web site and the games were still on.

As the morning wore on the rain continued, with occasional downpours. We kept checking the web site; with the heavy rain the fields might become too wet for play. Then at around 10:00 the organizers cancelled the tournament. The fields were soaked and with every game played the playing surface worsened.

What a disappointment. Jake handled the news well and was happy watching the Pokemon marathon for the rest of the day.

I think Larry and I were more upset than Jake. We really wanted to watch Jake play in his kind of weather.
Posted by Sarah at 5:04 PM