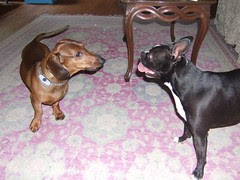 John&Ramona
Originally uploaded by Teckelcar
Yesterday our second batch of house guests arrived and they are Larry’s brother Andy and half-sister Abbey along with Abbey’s dog Ramona.

Ramona is a feisty Boston terrier and she is roughly the same age as John. Initially John was his usual idiotic self, lunging forward and baying at the poor thing. Fortunately Ramona is not a wilting flower and was able to overlook John’s rude behavior. After an hour or so John finally calmed down enough that he could be let loose and the fun could begin.

And boy did they cut loose.

The two of them barreled about, chasing each other and leaping about. Ramona would rear up and box John with her paws and John would goose her with his long nose. The two are them are fairly well matched. They are roughly the same size, if you ignore the legs. John has speed with stamina and Ramona has blindingly fast agility. It is amazing watching her flip and turn about.

John adores her and does not mind when she plows him over. When she stops playing he starts baying at her to start up again. Meanwhile Ramona has a silly grin plastered on her face and laughs at him.

I think we will have two very tired dogs by the end of this visit.
Posted by Sarah at 11:52 PM