Wednesday was Max and Rebecca’s Preschool Graduation Ceremony. Which, I have to admit, is a very silly thing, but it is a very big deal for the dynamic duo. They had been practicing for weeks and it did mark an important milestone in their lives. Next fall they will no longer little kids, they will be riding the big bus along with their brothers to go to school.

As I mentioned, the ceremony was a big deal and the class had been practicing for weeks. The parents were intentionally left in the dark what was going to happen, because it was going to be a big surprise. However, since Rebecca had missed so much school from her mystery illness her teacher almost sent home the songs and poems she needed to learn for the big day. But in the end it turned out it wasn’t needed; she quickly caught on and didn’t need the added coaching.

So on Wednesday morning Larry mentioned the Nate had an optional baseball practice that night at six. I replied “That is not going to happen. We were going to graduation.”

Ironically, when Larry called up Coach Jerry, it turned out that the coach couldn’t go to the practice either. It turns out the he was catering the cookout after the graduation.

Anyway, we showed up at the proscribed time with a freshly baked batch of cookies in hand. I didn’t have to make cookies, but since Rebecca had been asking to make them I thought it would be an appropriate time to bring them. Everyone should get a cookie when they graduate. Max and Rebecca were whisked away, I dropped the cookies off in the kitchen and told the preschool’s owner (my neighbor Deb) and then found seats for the rest of us. Nate after about 2 minutes found a friend and was off with him looking at pictures and talking about their respective younger sibling(s). Jake was happy to be with me a keep an eye out for dad. Larry was coming straight from work.

A little after 6:30 pm the program began. We were first treated to a slide show of all the kids playing together over the course of the year. It was very cute and I filmed part of it, but I won’t bore y’all with it. Instead I’ll show you a bit of a highlight reel instead.


The whole shebang started with the class entering from the back and proceeding down the aisle clad in their caps and gowns to the sound of Pomp and Circumstance. It was extremely cute and Max led the processional while holding the flag. It this point I must apologize for the poor camera work. I really need to remember to bring our tripod to theses events. I probably will by the time we hit high school graduations. 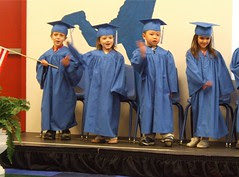 up on the riser
Originally uploaded by Teckelcar
After they all filed in and sat up on the riser, Max requested that we all stand for the pledge of Allegiance. Once we were done with the pledge the class recited a poem and sang “You are My Sunshine.” Both were cute, but I cut them out for brevities sake. Instead I included the student participation “When I Grow Up.” Max was a totally hoot and really relished that he could use his outside indoors. I think he was by far the loudest. Rebecca was loud too, but not at Max’s level.

Then the whole thing came to a close with the class singing “Kindergarten Here We Come.”

Max and Rebecca had been singing it for the past week, but I didn’t know it was for the graduation. It was a sweet way to end the ceremony. Then it was a stampede for some good barbecue, cake and cookies.