Artist of the Week: Golden Dogs

At Meryl's urging I'm the artist of the week.

Last weekend my dachshund club held its specialty show. In addition to trophies and judges' gifts we provide markers for the ring. Years ago a club member had cut out four silhouettes of dachshunds and four simple stands to support them. The markers had become battered and worn over the years and it was time to freshen them up.

ring markers
Originally uploaded by Teckelcar
I got tapped for the job and collected them a month ago. I didn't take any before photos, so you'll have to trust me on this one.

The dachshunds were originally painted gold with a black outline on the edge. Details, such as the eyes and the outline of the ears, were also painted black. Red stickers on one side were used to denote the placements of first through fourth. The bases were simply black with red stickers for the clubs initials along the top of the stands.

Up close and with a critical eye, the markers were a disaster. At one point the markers had looked nice, but now they were decidedly tatty with some of the stickers peeling off and a bit askew. On the reverse of one of the silhouettes fingerprints clearly marred the surface. The paint was worn and chipped and in desperate need of being completely redone. I also objected to the odd eye placement and overall slapdash paint job.

Mind you I'm not in any way a perfectionist, slap dash is a theme in my life, but I at least try to get the details right and make the whole thing look nice.

ring markers places
Originally uploaded by Teckelcar
So the first order of business was to peel of the stickers and pick up some paint. I decided to get gold and black spray paint for the surfaces and a little bit of red and black craft paint for the detail work. Then I would top the whole thing off with a couple of coats of clear spray paint to protect the surfaces.

The best decision I made was to ditch the stickers and do freehand the writing. After years of writing on cakes I have become fairly good at writing free hand with icing and I thought that skill would translate well with paint and it did.

I was a little hesitant at first, but the numbers looked great. In fact I was so pleased with the results I decided to paint on the reverse sides of the dogs the placements for Best of Variety, Best of Opposite Sex, Winners and Reserve. 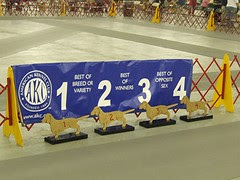 In the ring
Originally uploaded by Teckelcar
I think in the end they looked great in the ring. The writing is less than perfect, but the overall effect is quite snazzy.

The bases look much better without the wrinkled stickers and with the spray paint I got an almost lacquer like finish on the them.

It was such a satisfying project. With each coat of paint I could see progress and using spray paint was a gas. The club was very pleased with the final results.
Posted by Sarah at 11:21 PM